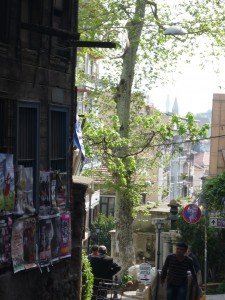 What does Turkish literature tell us about Istanbul? Many authors grew up in Istanbul, or moved to this city at a later stage in their lives. And in many of their stories, novels and poems the city turns up as a décor or a character.

On 6 May 2017 the Netherlands Institute in Turkey will organise a literary walk for people who want to learn more about Turkish literature while strolling through the city. Walking along places that played an important role in their work, Hanneke van der Heijden will tell about the work of authors such as Orhan Pamuk, Ahmet Hamdi Tanpınar, Yusuf Atılgan, Oğuz Atay, Sait Faik Abasıyanık and their contemporaries. But also about the world of books today: what kind of publishers are there? What kind of books are being translated? What do readers in Turkey read?

Hanneke van der Heijden is a Dutch literary translator of Turkish literature. Her articles on literature from Turkey can be found on her website.

Please send an email to g.gurmen@nit-istanbul.org for registration. There are limited places available.