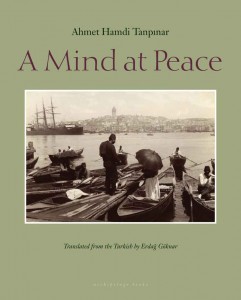 Although most of the articles on this site are written in Dutch, you will from now on also find contributions in English. Just click on “English” on the main bar of this site.

The first post is an article about the novel Huzur (A Mind at Peace) by the Turkish novelist Ahmet Hamdi Tanpınar. The article is based on talks I gave the last three months in De Balie in Amsterdam and at the Netherlands Institute in Turkey.

In the U.S., novelist, essayist and poet Ahmet Hamdi Tanpınar was rediscovered only recently when Penguin Classics published The Time Regulation Institute (Saatleri Ayarlama Enstitüsü; 1954/1961) in a new English translation by Maureen Freely and Alexander Dawe. In a review  in The New York Times the book was praised as a ‘literary discovery from the past’, one of those books that ‘arrive […], as if to remind us that this thing called literature is much larger than our own little moment.’